It seems like the one thing her and Trump can agree on, is that insulting people based on height is just a prank bro: https://www.news18.com/news/world/in-american-politics-height-matters-trump-knows-it-decoding-us-prezs-obsession-with-nicknames-2503855.html

But while Trump mocks everyone, Warren is a feminist who has complained about women being called "fat broads" and "horse-faced," and many of her followers have likewise taken issue with body shaming.

Fortunately, based on some comments from users on YouTube and Twitter, it seems like I'm not the only one who thinks there's an added layer of hypocrisy here from Warren:

AKA the message in Shrek.

On a related note, it seems like there are people who don't know there's this thing called high heels:

Email ThisBlogThis!Share to TwitterShare to FacebookShare to Pinterest
Labels: heightism

Taller is healthier.
Failing to reach one's maximum height is linked to undernourishment, but short stature itself is not unhealthy when genetic. For example, short people live longer on average[1][2]. Being taller has also been linked to cancer and collapsed lungs. More research on this here.

Height is mostly dietary.
"...about 60 to 80 percent of the difference in height between individuals is determined by genetic factors, whereas 20 to 40 percent can be attributed to environmental effects, mainly nutrition.". One can see this in how certain families, like those of Manute Bol or Steven Adams, are all extremely tall. In Manute's case, he reached a height of 7'7 despite being malnourished (although he may have gotten even taller had he not been). Point is, just because someone is very tall doesn't mean they were fed correctly.

Every younger generation gets taller.
The average American has not gotten taller in the last 50 years. In fact, average height in the medieval ages was only slightly shorter than it is now. If you've been noticing how youth are tall for their age nowadays, it's because kids today hit puberty sooner.

Short men are angrier on average.
This study found that tall men fly off the handle more quickly. Every other study I've seen on this topic either didn't test for aggression, or tested women rather than men, tested wild animals, etc. Examples of these more questionable studies: http://archive.is/cYusN

Height is viewed no differently than baldness, big noses, etc.
None of these other groups are labeled with a complex or syndrome the moment they display aggression or ambition. Sperm banks ban all men below average height, but they do not ban men based on the Norwood Scale. Height affects the ability to defend oneself during physical altercations, most other superficial traits do not. The differences go on.

Height is a good indicator of IQ.
Most sources say the correlation coefficient between height and IQ is 0.1 or 0.2. This is considered a weak correlation, which makes using height to gauge IQ virtually pointless. Some of these studies are also conducted on children. If a bunch of youth are the same age, but some receive growth spurts sooner, these taller kids will have more developed brains. Yet these researchers ignore that in order to claim tall adults make more money due to higher IQ (even though simply controlling for IQ shows that it's not the reason for the height premium: [1][2]). These IQ/height studies are also intra-racial, which means they fail to address why Asians for example are typically shorter than Westerners, yet they consistently score higher on IQ tests.

Men and women are equally strict about height.
Height has never played an important role in being targeted.

This Reddit thread is a clown show, and yet has over 200 upvotes:

Basically, for some reason people think a short guy has to either become a raging lunatic in the face of height prejudice, or turn into a dancing monkey. The only one remotely making sense in that thread is the person who said, "There is a third option. It is called learning to accept that you are short while not making a fool of yourself." Otherwise the whole topic is a disaster. You have a bunch of short clowns, some 7'3 guy telling short men how to behave... Even the main short guy questioning the whole thing says he believes the "short man syndrome" stereotype, even though there is zero good science behind it.

When people discriminate against a short guy, he is expected to essentially turn into a jester and just take it. But whenever a short guy is the one doing the discriminating, for some reason I never see others apply that same "take it in stride and just make fun of yourself" mentality to themselves. No, it basically becomes a free-for-all to slander and insult short men back. Odd. Almost like short men are expected to be more docile than everyone else, lest the "short man syndrome" label rear its head. Of course, nobody else is diagnosed with a syndrome when they get angry about being mocked or dehumanized.

If I were working the register, and I insulted some fat or bald customer, I doubt many would take my side. At most, people would just tell the customer to not overreact. They wouldn't pressure that customer into becoming a personal comedian for literally any random asshole (not just friends and family). It's only with short men where the reaction is gauged more harshly than the initial action. People spend more time lecturing short men about how to react to discrimination, rather than talking to the ones actually doing the discriminating in the first place. When it comes to the latter group, it's always "just ignore them" or something like that. But it seems like people are unable to ignore indignant short men. Short men are the ones told about how height isn't uncontrollable and to accept shortness, when others should also be taught that.

P.S. I doubt College"Humor" would send a similar message about women's weight. It's no wonder their employees are getting laid off, people are sick of their hypocritical preaching. They once made a video about how oppressed women are, because the moment a woman isn't always smiling and amiable, people say she's on the rag. Well, these same folk call any short man who isn't completely castrated a "pocket prince," probably excusing themselves with the "it's fighting the patriarchy when we do it" mindset. If there was some way to magically make short men unable to ever become angry, I swear a frighteningly large number of people would go for it, many of them from the "tolerant" left.

Related: a woman receives almost 50k likes on Twitter for getting mad at a store's weight jokes. The difference in who's allowed to defend themselves is interesting, especially considering how height is an immutable trait but weight isn't. This would be like some bizarro world where it's okay to judge a person's skin color but not their political beliefs, because the former isn't controllable but the latter is.

Full thread on this here: https://heightismhub.freeforums.net/thread/384/kevin-hart-admits-insecure-height

Also keep this in mind whenever people tell a short man to self-deprecate in order to show how he's not insecure about his height[1][2], because there is no short guy who self-deprecates more than Kevin Hart.

The Guardian Attempts to Shed Light On Height Prejudice

I say "attempts" because partway through the article, it essentially shifts the spotlight from heightism, to how short men react to heightism. Starting from here:

"Insecurity generally manifests in oversensitivity to insult (which may contribute to the stereotype of short men as angry, resentful, over-compensating Napoleons.)"


The article then goes on to give various examples of short men who cope with heightism in their own ways.

That's okay and all, but if one looks at The Guardian's articles about fat shaming (of which there are many), the focus is usually only on the prejudice itself. Do a ctrl+f search for words like "insecurity" on their articles about weight, and you'd be hard-pressed to find a single hit. Why? Because the word "insecure" is inherently negative, and makes it seem like the problem is with the person on the receiving end of the stigma. Mainstream websites avoid using such phrases for issues like body shaming, because they don't want readers to think it's the fat person's mentality that's the problem.

There's this part as well:

"As to whether or not short men really require kudos just for being secure … well, it depends on your perspective."


Whatever your perspective is, good luck finding the same line of questioning in mainstream articles about fat women. The message I've gotten from those, is that you're a bigot if you don't automatically praise females for being proud of the bodies. People basically have no choice nowadays but to pat women on the back over body positivity, or else feminists will show up to teach everyone a lesson. Less double standards here would be nice.

The existence of The Guardian's article about height shows how far we've come, and how far we have yet to go in terms of both quantity and quality. On one hand, it's nice that a mainstream website has an article about heightism at all. On the other, it's interesting how many more posts there are about weight than height. The way the topics are discussed is also worth noting. When it comes to weight, the responsibility to behave is placed entirely on how everyone else views overweight people. But when it comes to height, we start talking about how short men should view themselves. It's ironic how The Guardian's height article talks about "toxic masculinity," because the idea of men manning up while women are catered to is a classic gender dynamic. We're getting somewhere though, there's no doubt about that, and a lot of short guys are grateful to get any scraps at all from these publications. I still recall being told to stop discussing heightism years ago because it'd never get any recognition.

Feminist Claims People Only Care About Height Because of "Toxic Masculinity" 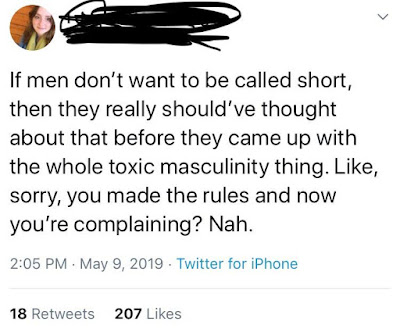 I like how she phrases everything in the present tense, like some guy born in the last few decades is still responsible for whatever she thinks happened ages ago. How did this get over 200 likes? All I know is that this is why there's so much resentment towards feminism these days. Imagine being told you're sexist unless you're a feminist. Then other feminists basically say, "I think one of your ancestors wronged my ancestors, so it's no big deal when I wrong you." Yet somehow people are still shocked when any male doesn't identify as a feminist.

It doesn't even make any sense. Men tend to be taller than women, so if a man is below the average male height, even in the most feminist of societies he would be classified as "short" for his gender. Otherwise it'd be like saying women would enjoy micropenises and think they're big, if only it weren't for that pesky toxic masculinity. Things like looking up at or being carried by a tall male, that's all physical and has nothing to do with social concepts. If anything, it sounds more like toxic femininity to me.


This also makes it seem like women are puppets whose strings are easily pulled. Men allegedly tell women to be biased based on height, so even feminists simply comply? Very strong, independent, and empowered. When was "toxic masculinity" supposedly invented anyway, and what's forcing these woke feminists to misbehave right now? Clearly not their own choices, that would mean taking responsibility for one's actions.

Email ThisBlogThis!Share to TwitterShare to FacebookShare to Pinterest
Labels: heightism

Appreciate it, because short men are labeled as insecure whiny Napoleons when discussing the same issue:


Why is discrimination against the short considered not only tolerable, but also amusing? In an era constantly on the lookout for prejudices to denounce, this obvious one gets a pass.

The main reason our culture doesn’t denounce short-shaming is highly revealing about the essential nature of wokeness.